This run is about rather more than the results, so they will follow at the end.

Firstly, a picture of the man himself, in Wytham Woods, naturally. 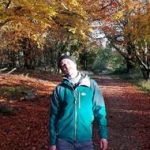 Here is Simon’s opening speech, which summed up what Mark meant to us, and why we were gathering in his honour.

Then, a link to the piece by Herbert Read, read by Mark’s sister during the oak planting:

Some background information about the oakling itself, courtesy of Benedict.

Here are the results. A word from the timekeepers to say that these values may not exactly match what people recorded on their Strava/Garmin/whatever, but they should be close enough, and the order is correct, which is the main thing for Club Championship purposes.

Thanks to all the marshals and helpers, and well done Tom for a fine win.

21/12: Club Championship points have now been added. A reminder that you have to be a paid-up competing member in order to score points. Any queries, please ask.

Also, if anyone played their joker (Robert?), please let me know.